The Story of a Tripartite Arrangement - Leucaena Grass and Angus Cattle

A decision was taken during 2012 to establish more leucaena and grass on some of the lighter cultivation country.  An area of about 400 acres (160 ha) was identified and Taramba leucaena seed was planted in the last week of October 2012.   The seed had been harvested the previous year from one of our older stands and was planted at 4.1kg ha in twin rows 1 metre apart and about 5 metres between the twin rows.  Seed was treated with inoculant and Cosmos (insect control) and band sprayed for a width of 4 metres over the rows with Spinnaker (weed control).

A grass mixture consisting of purple pigeon, katamboora and Tolga Rhodes, buffel and bambasti together with some mixed medics was planted in late January on good moisture between the leucaena rows.  We harvest up to 10 tons of this grass seed mixture most years for our own use and plant it reasonably heavily as the germination rate is an unknown factor.  Some old panorama millet seed with some silo damage was included this year.This was followed by 125mm of good soaking rain over four days.   A further 240 mm fell during February and a final 75mm on 1 March which resulted in serious flooding.  Fortunately there were no stock losses but we suffered considerable fence damage with flood waters   over 1 metre deep in some paddocks.  One upstream neighbour had 150mm in 3 hours.

Oats (Drover and Reil) was planted in February on about 330 acres (132 ha) of paddocks interspersed between the leucaena paddocks at the rate of 32kg ha. A further adjacent paddock of Ranger Forage barley will be planted in April. 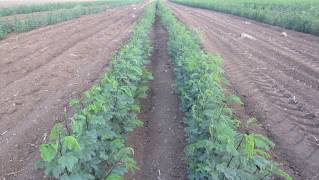 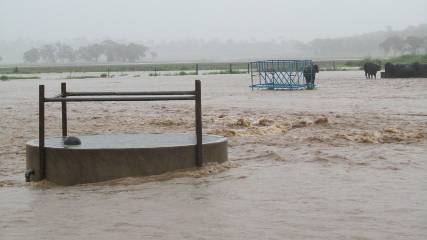 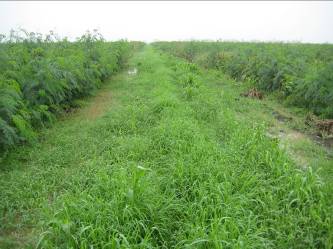 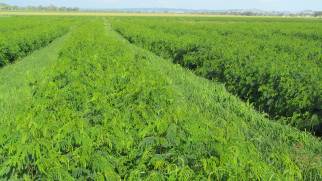 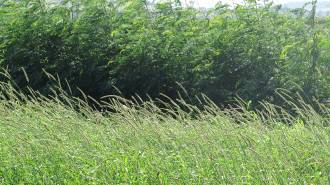 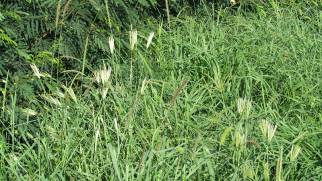 The grass was so heavy it lodged. 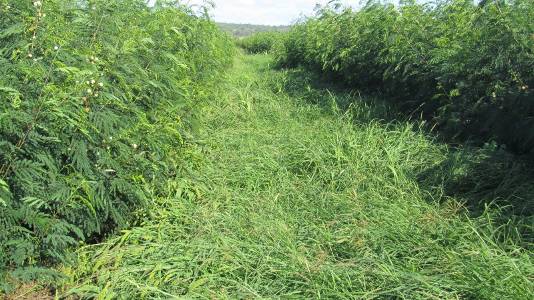 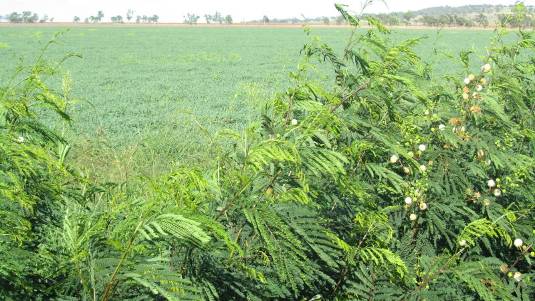 The original cultivation area had not been fenced and had no watering points.

A new solar powered submersible pump is being installed on an existing bore and four new troughs with 1.5km of 50mm poly piping laid.  8kms of 4 barb fencing is currently being erected with another 7km to be completed over the next few months.

And now to the third component of the Tripartite Arrangement   - Angus Cattle!

As soon as the fencing and water is completed in the first paddock (hopefully by mid April weather permitting) 250 Spring Angus weaner heifers will be introduced to the lush feed. As they have previously been on leucaena with their Mums they should have the correct rumen bugs.

They have been weaned over the last 2 months with first calf heifers weaners starting off at about 200kgs and some of the best off older cows weighing in at 395kgs.  Their average was about 280kgs.

As most of the grass has now seeded we shall adjust stocking rates to ensure most of the feed has been eaten by the time the frosts arrive.  In our area frost acts as a natural management aid and the leucaena is cut back to ground level.  It soon responds in the spring even with minimal rainfall and provides a green pick which combines well with the dry grass to enable the breeders to calve out and cycle well to get back in calf.  We have found that weight losses in dry years are significantly reduced by using the leucaena and grass.  Naturally in such years stocking rates are reduced but the animals stay healthier than on straight grass.

Our bulls have performed well on leucaena with even better semen tests but strangely they do not clean up the plants as efficiently as the females.  We continue to receive very positive feedback from buyers of our bulls in regard to both adaptability and fertility.

The young stock and sale bulls graduate from leucaena to oats and normally their weight gain is significantly increased.  Weaners usually have a 2 to 3 month post weaning period on leucaena before the oats is ready.  Over the years their average daily weight gain for this period has been about 0.7kg per day.  Our aim is to increase this to 1kg per day for the 60 to 90 day period.

This year the heavier end of the weaner bulls averaged 2kg per day for the last 30 days on their Mums which is indicative of the good season.  We must never forget that over 70% of the final animal is a result of what went down its throat!

Visitors are always welcome to inspect our operation by arrangement with Jonathan.

Establishment and management of leucaena in our area of the Darling Downs is a skill which he has developed over a number of years and he is only too happy to share his experience with interested parties.