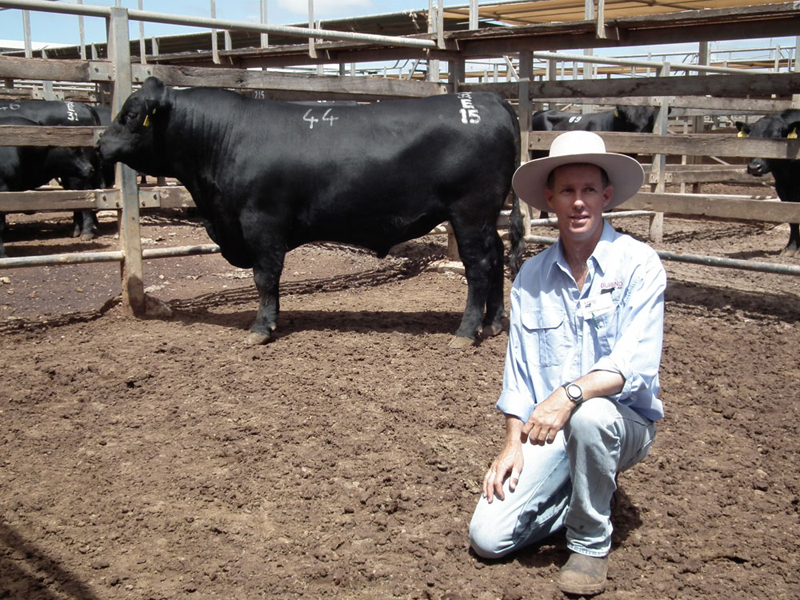 Angus breeders were forced to compete strongly for bulls at the annual Burenda and Lawsons sale at the Roma Saleyards last Wednesday.

The entire offering of 91 bulls sold under the hammer for an average price of $5000.

The competition was particularly strong on the Burenda offering, pushing the average price of a Burenda bull to $6156 and a top price of $11,000. The Kaimkillenbun based Burenda Angus Stud is clearly in favour with commercial producers who scrambled to secure the highly impressive bulls throughout the sale.

The Lawsons bulls also met solid demand to average $3844 and top at $7500. Lawsons are now the largest Angus seed stock producer in Australia, selling over 1000 bulls annually. Based in Victoria the Lawson family established its Queensland division at Toobeah in 2006 and now sells annually at Roma.

Mitchell's Statham family, Possession Creek, paid the top price for the day, buying Burenda Explosive E15 for $11,000. Explosive is an AI bull by the well-known Ardrossan Equator NAQA241 who has well over 500 progeny Australia wide. At just 18 months of age, Explosive weighed in at 748kg and boasted a scrotal measurement of 40cm and an EMA of 110 sq. cm. With the assistance of Watkins & Co Roma, the Statham family continued to chase quality throughout the sale, paying an average of $7200 for their five bulls.

Burenda also recorded the second top price of the sale selling Burenda Dynasty D43 for $10500 to the Blackburn family through Landmark Mackay. Dynasty offered buyers some impressive figures with a great gestation length (top 10 per cent) and growth and carcase EBVs all in the top 1 per cent. Weighing in at 1058kg at 25 months, Dynasty had consistently been the top weight performer in his drop of Burenda Angus calves and averaged 3.48kg/day over 30 days on an oats crop while his siblings achieved 1.84kg/day. Sired by Ardrossan Admiral, Dynasty also had one of the largest scrotal measurements in the draft at 42cm. The Blackburn family also paid $5500 for the 972kg Burenda Dagger.

Mitchell graziers Don and Kym Noon, Cedarvale, purchased the top price Lawsons bull, paying $7500 for Lawsons New Design 1470 D 184. The only Bon View 1407 son in the sale, this bull weighed in at 760kg and featured a scrotal measurement of 41cm. The Noon family also paid $6000 for the 17 month old Burenda Envy E32 who weighed in at 696kg.