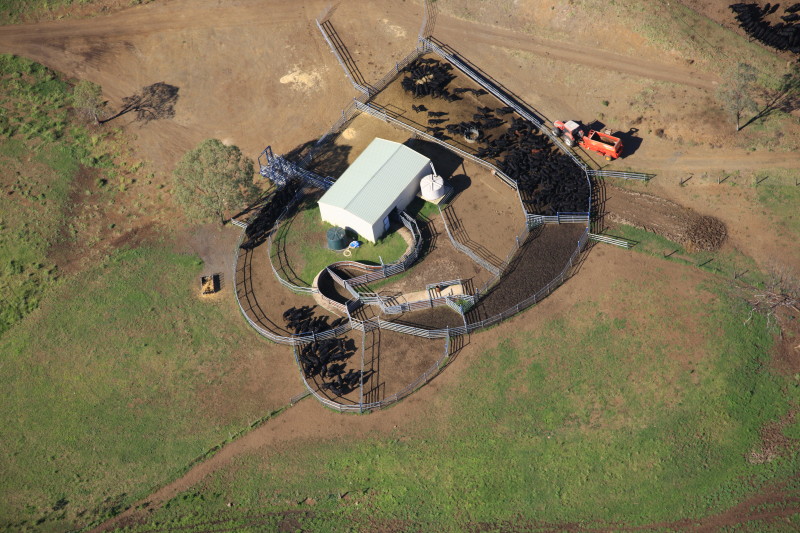 WHEN the Dalby Downs cattle operation began to outgrow its existing set of timber yards last year, manager Jonathan Schmidt looked to the principles of US livestock handling expert Temple Grandin for guidance on designing a replacement.

Mr Schmidt's aim was to combine a safe and comfortable working environment for both people and cattle in a design that effectively made cattle "want" to work for their handlers.

The design also had to account for existing infrastructure in the form of two laneways that fed into the site and a large shed that housed the existing race, crush and scales.

A key feature of the design he settled upon incorporates a curved race and a D-Yard that is built to the dimensions suggested by Dr Grandin. "I had read her books and decided to put a D-Yard in because no one needs to get into the yards to force them into the race, and the operator is on a platform outside the yards.

"I was just going to design my own size, but I ran into an associate from Augathella, and he said to me, 'Jono I've made three out here, the first I designed myself, and the second and third one I've made it to the dimensions that Dr Temple Grandin worked out, and he said those dimensions are very important.

"It doesn't matter how you make them, but it is important to keep her dimensions and her curves."
It took Mr Schmidt and three staff one day to pull down the previous yards, and about two weeks to complete the earthworks and gravel pad required for construction of the new yards to begin.

"The shed was already there, so on the uphill side we had to dig out about eight feet of gravel and dirt to get the ground level down to the same level of the shed, and we put that round on the downhill side of the shed and that was the basis of the pad for the yards," Mr Schmidt explained.
Mr Schmidt and his three full-time employees spent about 10-12 weeks building the yards, working around a sorghum and mungbean harvest and a winter oats plant. The resulting yards, which were finished in early July, are large enough to handle 500 standard cattle units at any one time, and early test runs have delivered great results.

As a measure of their effectiveness, Mr Schmidt said it took two workers just 90 minutes to scan and weigh 200 weaner heifers recently. "That would have taken three or four of us four to five hours to put them though using the old set up," he said.
"We're very pleased with them, everything is just right - it is better for the cattle and better for ourselves."